Investors in Ethereum (CRYPTO: ETH) might have a bone to pick with Coinbase Global (NASDAQ: COIN), the world’s most popular trading exchange for cryptocurrencies. Coinbase does a lot of things right, but one thing that it’s not known for is being a place to generate passive income on active investments. It offers staking, inflation, or interest awards on just six of the dozens of digital currencies available for trading on its platform.

Earlier this year, Coinbase began offering Ethereum investors the ability to generate staking rewards on the world’s second-most-valuable crypto, but there was a pretty big catch. Unlike other exchanges and decentralized financial platforms that let Ethereum owners generate income on their crypto and easily withdraw from the program, Coinbase investors opting into its staking rewards would be unable to trade that position until Ethereum’s transformation to a proof-of-stake model was complete. They were converting their crypto to Ethereum 2.0, the inevitable landing place for the token once the mother of all makeovers was complete. Coinbase did promote the eventual rollout of a liquidity event ahead of the Ethereum migration, but that milestone just got moved further away.

A bridge too far

Until just a few days ago, a Coinbase help page explaining how staking rewards worked on Ethereum was pretty clear on the terms of withdrawing from the program:

During the initial launch, you will be unable to trade, send, or sell the amount you have staked. Later this year, we expect to enable liquidity of your staked ETH funds.

However, there will be no liquidity “later this year” for staked Ethereum. A new edit — so fresh that it’s even in a different font size — is pushing out the first potential exit strategy to 2022. 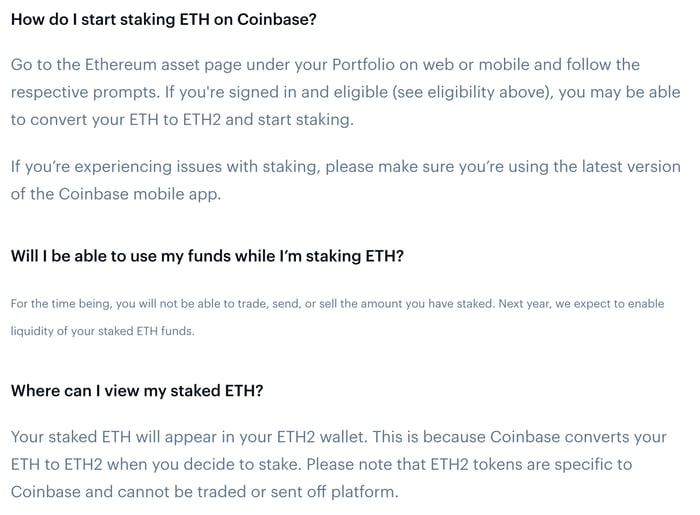 Coinbase investors knew that this wasn’t going to be a process for the impatient. There is no firm date for Ethereum’s makeover to the more-efficient Ethereum 2.0. But Coinbase expecting a withdrawal option at some point in 2021 offered some relief. With Ethereum prices sliding recently (down 6% over the past week and 12% over the past month), the customer complaints will likely grow louder over the program’s restrictions.

It gets worse. It’s not just the withdrawal option that’s changing. The interest earned on staked Ethereum on Coinbase keeps shrinking. When the plan was first announced, it promised an annual interest rate as high as 7.5%. It was actually 6% when the staking rewards program officially launched, it was whittled down to 5% in June, and it’s at 4.5% now. In Coinbase’s defense, it did make it clear that the interest paid would likely contract over time. The problem now is that the holding period is being extended with lower rates on a crypto that’s staging a retreat. Ethereum is now 23% below last month’s all-time high.

This doesn’t have to end badly for Coinbase or its customers with staked Ethereum. The crypto continues to be one of the more promising digital currencies with some compelling near-term catalysts for growth. If Ethereum winds up trading substantially higher by the time Coinbase makes it eligible for withdrawal, it will be the ultimate win-win situation. It may be a sticky situation now with the recent sell-off, but crypto’s volatility also comes with the promise of hefty long-term gains.

The post Is Coinbase moving the goalposts on your taked Ethereum? appeared first on The Motley Fool Australia.

from The Motley Fool Australia https://ift.tt/3FDXZCc