Ethereum (CRYPTO: ETH), the second-largest cryptocurrency, sports a $445 billion market cap after a five-bagger performance in 2021 that made even Bitcoin (CRYPTO: BTC) look sleepy. 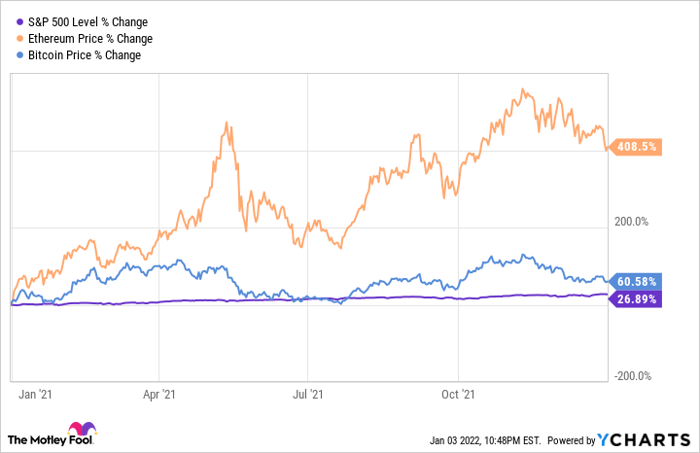 However, this blockchain network also faces a couple of technical challenges. Ethereum is known as a powerful decentralized computing platform, but its transactions are also seen as slow and costly. Therefore, several rival cryptocurrencies are challenging Ethereum’s market position by offering some combination of faster processing and lower transaction fees. 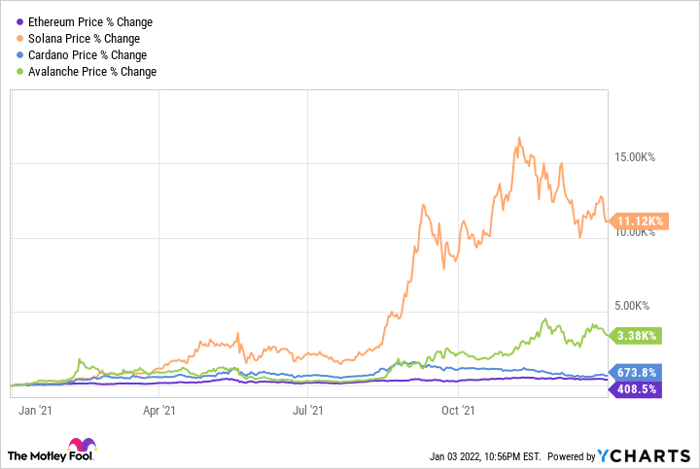 Don’t sell your ether tokens just yet, though. As impressive as these Ethereum rivals may be, they don’t stand a chance to kill the old king in 2022 — or in the foreseeable future.

The king of smart contracts

The Ethereum blockchain can process approximately 20 transactions per second (TPS). The average transaction currently costs roughly 170 gwei, where 1 gwei equals one-billionth of an ether token. At today’s prices, that gas fee works out to $0.16 per Ethereum transaction. It takes about 5 minutes to receive the 20 confirmations required to complete that transaction, on average.

To compare and contrast Ethereum’s figures with the market’s largest digital currency, the median Bitcoin transaction currently costs 23,000 satoshis (billionths of a bitcoin), or $10.66. This trade only requires four network confirmations, but Bitcoin’s slower system results in delays as long as 40 minutes — unless you pay a higher fee to earn a faster processing schedule. The system can only settle roughly five transactions per second these days.

However, Bitcoin was never designed to churn through large numbers of transactions per second — this currency is meant to act like digital gold or cash. Security and stability are more important here than lightning-quick trade settlement.

Ethereum, on the other hand, was intended to provide immutable blockchain ledgers to a variety of decentralized applications (dApps). In this case, low fees and fast transactions make a big difference.

You should also know that both Ethereum and Bitcoin still use the energy-munching proof-of-work blockchain architecture. Millions of computers and specialized mining systems around the world are solving complex cryptography problems in order to settle transactions and earn tokens for the miners.

Each of the alternative smart contract blockchains has a unique set of attributes, though they all use a different blockchain system known as proof-of-stake. In this case, transactions are settled by consensus between proven holders of the cryptocurrency in question, resulting in lower energy consumption and a more scalable system. Here’s how this looks for various platforms:

But wait — things are changing!

Ethereum’s developer team isn’t sitting still while upstarts and alternative solutions rush in to steal their lunch. Through a series of upgrades to the underlying blockchain systems, the digital currency is transforming into Ethereum 2.0 before our eyes.

The Ethereum Foundation has already set up a proof-of-stake chain known as the Beacon Chain, which will merge with the current blockchain network later this year. The resulting hybrid should be able to process thousands of transactions per second while bringing costly Ethereum mining operations to a permanent halt. In 2023, the merged networks will add shard chains, spreading the processing load across 64 new blockchains.

The flawed Ethereum system you see today will hardly bear any resemblance to the upgraded and retooled Ethereum 2.0, apart from the fact that smart contracts designed to run on the old network will continue to work just fine on the new platform.

At that point, Ethereum will have erased most of the issues that Solana, Avalanche, and Cardano wanted to solve in the first place. Then, a cosmic game of ping-pong will ensue as the market leader and the usurpers take turns to develop game-changing system improvements.

None of the alternative smart contract networks stand any realistic chance of actually killing Ethereum — at least not in the next few years. Instead, we’re going to see healthy competition among projects with similar goals but different approaches, giving users and developers the opportunity to work with the best blockchain network for each end-market situation.

I’m not saying that Ethereum (or any of its rivals) will be around forever, but this particular cryptocurrency has a huge leg up on the competition in the form of early adoption and a massive market share right out of the starting gate. A smart cryptocurrency investor should build a diverse portfolio of promising coins and tokens, expecting a couple of misses alongside a few big wins in the long run. I own three of the four smart contract cryptocurrencies discussed above, and I’ll probably add the missing link, Avalanche, soon enough.

That’s no different from building a healthy stock portfolio for the long term. Investing is investing. The more you know, the better you’ll perform — and it’s OK to take a few risks along the way, as long as the potential upside is big enough.

The post Can these 3 ‘Ethereum Killers’ actually kill Ethereum in 2022? appeared first on The Motley Fool Australia.

from The Motley Fool Australia https://ift.tt/33bcUWo