Shares of fintech stock Block (NYSE: SQ) fell 26.6% last month due to the sell-off in growth stocks and cryptocurrencies. There wasn’t any major negative news about Block’s operations, but the stock suffered along with other correlated asset classes as investors pull capital out of risk assets.

Block beat analyst estimates for the first quarter, and it reported those results in the first week of May. Investors are also looking forward to updates from the fintech disruptor later this month. Those events provide valuable insight on the financial prospects of Block’s business. No such information was available in April. The biggest development was the company’s announcement that it was launching a business lending product.

Instead, Block shares tumbled due entirely to market forces. Its price chart very closely resembled that of Bitcoin and the Proshares UltraPro QQQ ETF, which is a good proxy for growth stocks right now. 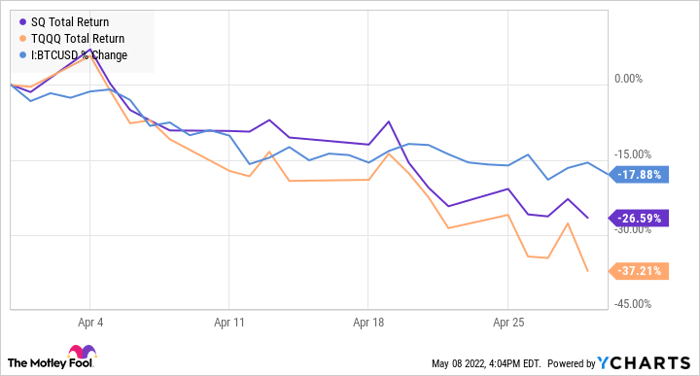 Investors are clearing out of volatile assets, including cryptocurrencies and high-valuation growth stocks. Block is a growth stock that is linked heavily with cryptos and blockchain technology, so it never really stood a chance in April’s market.

Block is dealing with a slowdown, but it’s still posting great growth results. The company’s gross profit rose 34% last quarter. This marked a deceleration in the rate of expansion, but it broke a relatively flat trend from the prior three quarters. Gross profit inched forward in its Square business unit, while Cash App had a breakout month that propelled the whole company higher. Adjusted EBITDA rose over the prior quarter, but it’s still down year over year. Block’s recent acquisition of Afterpay also contributed to that growth, so its “organic” expansion was slightly worse than the headline figures would imply.

The value of transactions being processed by the company declined last quarter. That’s likely to be a concern for investors. Consumers are hurting from inflation, and business activity could slow as interest rates rise from the Fed’s aggressive monetary tightening. Be sure to monitor these trends over the next few quarters from Block.

Block derives a significant portion of its revenue from Bitcoin, and it has purchased more than $200 million in Bitcoin, which it holds on its balance sheet. As a result, the stock is likely to be highly correlated with the cryptocurrency markets for the foreseeable future. Bitcoin only contributed 3.4% of Block’s gross profit in the last quarter, and its Bitcoin holdings amount to less than 1% of total assets on the balance sheet, so the market might be overreacting to crypto volatility in terms of its overall impact on the value of Block’s business. This can create opportunities for long-term investors, but it will make the stock even more volatile in the short term.

Block remains a compelling opportunity to invest in a business that’s committed to unlocking the value of Web3, the blockchain, and cryptocurrencies.

The post Why did Block shares fall 27% in April? appeared first on The Motley Fool Australia.

from The Motley Fool Australia https://ift.tt/SAUk3EY