Investors get excited about stock splits. It’s certainly understandable; getting more shares of your favorite company can bring a smile to the faces of even the most stoic among us.

It’s also true that companies that announce their intentions to split their stock tend to see their share prices run up as the split date approaches. Even though stock splits do not fundamentally alter the value of a business — they simply create more slices of the same pie — many people are happy to buy more shares at lower prices.

Professional traders know this, so they also tend to buy stocks that are about to split ahead of their split dates. All this buying can drive share prices up, bringing in more momentum traders and adding fuel to the fire.

But that’s not what this article is about. Yes, Amazon (NASDAQ: AMZN) is scheduled to split its stock 20-for-1 this weekend. Yet there are far more important and exciting reasons to buy shares today.

Here’s why the cloud-computing juggernaut’s stock price is set to soar.

When most people think of Amazon, they understandably think of its massive e-commerce business. The online retail leader commands the lion’s share of many global e-commerce markets. For example, roughly 57% of all online retail purchases in the U.S. are made on Amazon’s platform, according to digital payments research company PYMNTS. So the company’s e-commerce sites are how many people engage with its services every day.

Yet many businesses rely on Amazon for an entirely different reason. Amazon Web Services (AWS) is the dominant cloud computing platform. It’s the infrastructure millions of organizations use to power their cloud-based applications. AWS makes it easy to access high-performance computing and storage, as well as an ever-growing array of cloud services. Cutting-edge technologies, such as machine learning and artificial intelligence, are also readily available.

With lower up-front costs, it’s often more cost-effective for start-ups to use AWS than building out their own data centers. AWS also gives small businesses access to many of the same tools as their larger rivals. And large companies can use AWS to quickly scale operations while gaining additional security above what their own on-premise networks could provide.

For these and other reasons, AWS has become a huge and fast-growing business for Amazon, as well as its most important profit driver. The segment’s revenue surged 37% year over year to $18.4 billion in the first quarter alone, while its operating income soared an even more impressive 57%, to $6.5 billion.

With the shift to the cloud still in its early innings, AWS’ growth should continue to fuel Amazon’s expansion for many years to come.

Digital advertising is another often-overlooked profit driver for Amazon. With so many consumers beginning (and often ending) their online shopping searches on Amazon, the company’s ad platform has become an indispensable marketing tool for countless third-party merchants.

Amazon offers what few other companies can: the ability to advertise to consumers when they are most ready to buy. People go to the platform for the express purpose of searching for and purchasing the items they need and want. Conversion rates on its ad network thus tend to be much higher than on general search engines or social media sites. Merchants know this, and they’re willing to pay large sums to gain access to these customers.

Amazon’s advertising business, in turn, is growing rapidly. Ad revenue jumped 23% to a whopping $7.9 billion in the first quarter. With more ad spending moving to digital channels every day, Amazon’s burgeoning ad business is set to grow far larger in the years ahead.

3. The stock is cheap

The broad market sell-off has battered the prices of even the best businesses this year. That includes Amazon, which has seen its share price shed more than a quarter of its value since the beginning of the year.

The stock now trades for roughly 20 times its projected operating cash flow of $121 per share in 2022. That’s at the bottom end of the range it’s traded within over the past five years. 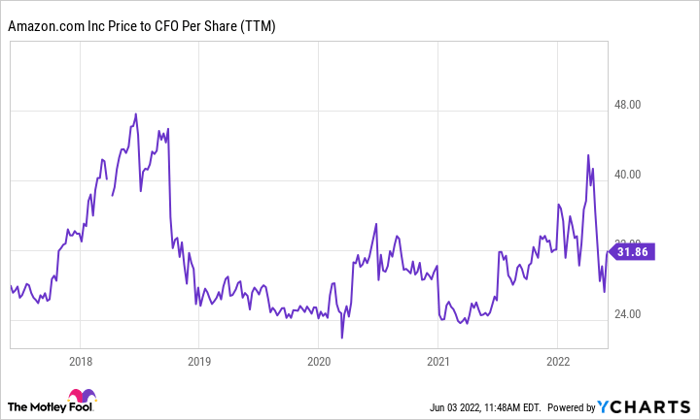 Amazon’s valuation looks even more attractive when we use analysts’ estimates for 2023. Its shares can currently be had for less than 14 times its expected operating cash flow for next year of $176 per share.

Said differently, Amazon’s stock is unlikely to be trading at its current price in the coming years. What’s far more likely is that investors will bid up the shares as AWS and advertising sales drive its profits sharply higher.

The post 3 reasons Amazon stock could soar after its split appeared first on The Motley Fool Australia.

from The Motley Fool Australia https://ift.tt/FEmdc6P