Uncertainty has been the name of the game recently, as the stock market continues to face an immense amount of pressure from high inflation, rising interest rates, and economic impacts linked to the war between Russia and Ukraine. It comes as no surprise that technology stocks have been particularly humbled, with the Nasdaq Composite slipping almost 25% since the start of the year.

Some of the world’s paramount tech companies like Netflix and Meta Platforms have delivered weak financial reports in recent quarters as the technology sector as a whole tries to navigate unfavorable macroeconomic conditions. Apple (NASDAQ: AAPL), however, is one of few companies that has sustained strong operational success in the past few months. In a market full of uncertainty today, the technology juggernaut offers investors an ideal investment opportunity. I think the great Warren Buffett would agree as well — the iPhone maker currently represents 40% of his Berkshire Hathaway (NYSE: BRK.A) (NYSE: BRK.B) investment portfolio.

Resiliency at its finest

Apple alleviated some investor unease by reporting an in-line Q2 2022 report. In the past twelve quarters, the tech leader has now beat earnings estimates each time and has only missed on revenue forecasts once, highlighting management’s strong visibility of the business. Total revenue and earnings per share (EPS) both increased 8.6% year-over-year, up to $97.3 billion and $1.52, respectively, and operating margin remained stable from a year ago at 30.8%.

The company has a fantastic one-two punch with its products and services business segments. While its products business — which includes the iPhone, iPad, Mac, wearables, Home, and accessories — increased a moderate 6.6% year-over-year to $77.5 billion, the company’s services segment — which comprises Apple Music, AppleTV+, the App Store, iCloud, and other subscription services — surged 17.3% to $19.8 billion.

Apple is well-positioned for future growth given its stable products segment and the untapped potential of its services business, which continues to make headway quarter after quarter. For the full year, Wall Street analysts project the company’s revenue to climb 7.7% year-over-year to $394.0 billion, and its EPS to rise 9.4% to $6.14. I think Apple’s steady growth in the wake of gloomy economic conditions, combined with its $28.1 billion in cash and cash equivalents, make the technology giant a no-brainer today. And fortunately for investors, the broader market sell-off has pulled Apple’s stock price down with it, making the company’s valuation attractive at the moment.

Apple’s share price has fallen 19% year-to-date, making its valuation much more attractive than what it was at the start of the year. The stock currently sports a price-to-earnings multiple of 24, which is largely in line with its five-year average of 23. But unlike many of its technology counterparts, the company’s valuation has shrunk in spite of maintaining success on the business front. Thus investors with lengthy time horizons can exploit the ongoing sell-off by purchasing shares of Apple at current valuation levels. 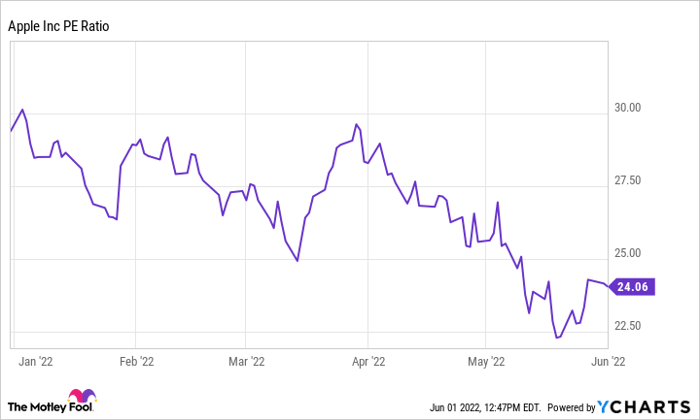 Apple is among the few technology companies that have continued to deliver strong financial results recently. Even still, the stock has been punished by investors, leaving it down almost 20% since the beginning of 2022. I believe investors should take advantage of the unjustified sell-off by accumulating shares of Apple stock today. The company’s business is in wonderful condition, and I feel its robust balance sheet and cash generation make it a very stable investment right now.

The post Representing 40% of Warren Buffett’s portfolio, here is why Apple is a great stock to own today appeared first on The Motley Fool Australia.

Before you consider Apple, you’ll want to hear this.

Motley Fool Investing expert Scott Phillips just revealed what he believes are the 5 best stocks for investors to buy right now… and Apple wasn’t one of them.

from The Motley Fool Australia https://ift.tt/4RYmDaf