The Shiba Inu (CRYPTO: SHIB) cryptocurrency had investors dreaming of instant riches last year. The digital coin rose tenfold in October, mostly thanks to a series of bullish tweets from Tesla CEO Elon Musk. At the peak of that hype cycle, the sky seemed to be the limit.

But the blaze of publicity has been fading since November. Shiba Inu’s price has fallen 88% below October’s zenith. Some investors may be thinking about this token as a turnaround story in the making, hoping that coins bought at these ultra-low prices will rise from the ashes to even greater heights, phoenix-like.

Unfortunately, that’s not likely to happen. Shiba Inu has had its moment in the spotlight and it’s time to look for the next massive multibagger instead. This time, let’s pick a name that can grow your investment many times over and looks capable of holding on to those gains in the long run. I would suggest a closer look at freelance services specialist Fiverr International (NYSE: FVRR).

Like Shiba Inu, Fiverr has taken a drastic haircut recently. The stock had zoomed into the public eye at the start of the pandemic, where freelance gigs performed over the internet seemed like a great use for lockdown-based spare time. And a few extra dollars in your pocket didn’t hurt during this period, which was plagued by a wave of layoffs and furloughs.

When coronavirus vaccines became widely available, market makers suddenly decided that Fiverr’s golden age was about to hit the wall. That’s where the price drop started. In all fairness, Fiverr’s stock traded at an unsustainable valuation of 47 times sales in January 2021. A correction was in order at the time, but now it has gone way too far down instead.

You see, the gig economy is here to stay, and Fiverr is a leading force in that category.

Work-from-home policies turned out to be quite popular with information workers. This revelation is good for Fiverr in a couple of ways. First, freelancers can easily plug their services into the remote-enabled workflows of this new era. Second, the time you used to spend commuting to the office can now be spent on catching a couple of quick freelance gigs on the side instead.

So Fiverr’s growth never hit that seemingly inevitable brick wall, and it’s only a matter of time before the stock starts to reflect this reality again. Let’s compare and contrast Fiverr’s plunging stock chart with its booming top-line sales: 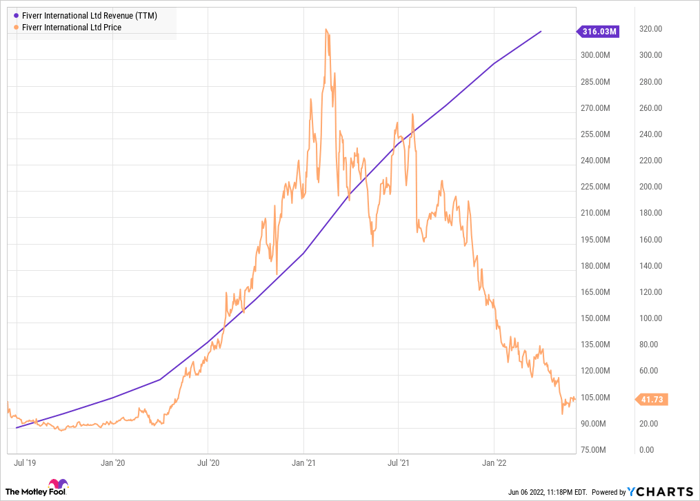 Furthermore, Fiverr isn’t some unprofitable gadfly. The company generates cash profits on a regular basis and trades at roughly 40 times free cash flows nowadays. That untenable triple-digit price-to-sales ratio is back down to less than 6. These are highly reasonable valuation ratios for a high-octane growth stock like Fiverr.

And don’t forget that we’re looking at a minnow swimming in a massive pond here. Fiverr’s trailing sales add up to just $316 million right now, but the global market for freelance service arrangements is already estimated at $115 billion in these early days of the emerging gig economy.

Fiverr’s stock is much too cheap to ignore right now. In fact, I doubled down on my own real-money Fiverr stake last week. This is one of the most inviting investment opportunities on the market. That includes flash-in-the-pan cryptocurrencies like Shiba Inu. Fiverr’s stock has suffered a price reduction similar to the dog-themed crypto ticker’s, but only one of the two investment names is likely to spring back to life again.

from The Motley Fool Australia https://ift.tt/DceU3h0